Are you thinking of having your roof tiles jet washed? Think again.

As stated by several roof tile manufacturers and the UK’s Trading Standards organization, pressure washers CAN damage roof tiles, strip the surface granules from the tiles and SHORTEN tile life expectancy. There is also a risk of flooding to the loft space.

Roof cleaning can be achieved by manually removing any excess moss and then applying the correct chemicals to the tiles. This approach doesn’t involve any water (no mess!) and won’t damage the tiles. Any individual tiles that are damaged during this process can be replaced cheaply as roof tiles are not that costly to replace if all the scaffold and access equipment is already in place.

It does involve using some chemicals (such as Wet and Forget) and also a good dose of patience!

One of the most gentle yet effective ways to remove roof moss and clean the roof is by way of scraping. A normal 9″ trowel is suitable, if your roofing contractor chooses a dry day any moss will flake off the roof much easier and there won’t be any scratch marks on the tiles. This approach is recommended by Forticrete who are one of several roof tile producers in the United Kingdom.

If you are concerned about scuff marks to the tiles then a rubber scraper and stiff brush can be used. Remember – with this method there is no damage to the tiles and no flood risk, unlike other roof cleaning methods such as high-powered pressure washing.

Look at the photo below, the moss was removed with nothing more than a trowel and a hand brush, the difference compared to the mossy section of roof is striking.

This photo was even taken before any chemicals were applied – what a difference! As you can see, there is no damage to the tiles, no scratch marks and the tiles have not been dislodged by the process. 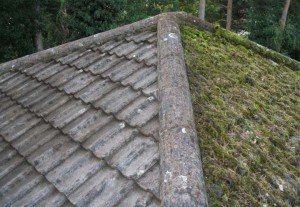 So Why Use Chemicals?

If you apply a fungicide/moss killer after the moss has been scraped off, it will soak into the tile and more importantly into the overlaps of the tiles and kill off any tiny moss spores. It will also kill off lichen and other organic growth on the tiles. This roof cleaning process can take some time after the excess moss is initially removed but there is no damage to the surface of the tile.

The application of roof cleaning chemicals will also prevent the moss from growing back for several years.

As a bonus, this chemical will also kill lichen, so those black marks on the tiles will fade away a few weeks after the treatment.

Which Chemicals are Recommended? 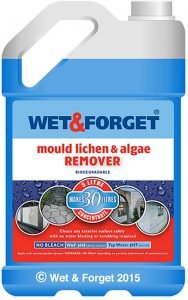 No Pressure Washing. No Flood Risk. No Expensive (and Useless) Roof Coatings

As stated in other pages, roof coatings are often an expensive and short term approach to roof renovation/roof cleaning. There is a real flood risk, the coatings often look terrible after a few years and they being mis-sold by many many companies in the United Kingdom.

The manual approach to removing moss and applying a chemical may be considered an old fashioned roof cleaning method but it is time-proven and you certainly won’t have to worry about paint peeling off the tiles.

Did I mention that manually removing the moss/applying a fungicide is often the cheapest cleaning method?

Expect to pay around £500 for a semi-detached house in Southern England. Compare that to £2000 for a roof cleaning and coating.

How Long Does the Moss Killer Last?

Assuming that the roof isn’t under tree cover, the moss shouldn’t grow back for about 3 years, after 4 years there will be light growth.

For this reason, the homeowner should instruct a roofing company to re-apply the chemical every 3 years, thus preventing any moss growth and keeping the roof looking clean.

Moss killing chemicals are not expensive, expect to pay around £30 for enough to treat a semi-detached property. A backpack sprayer costs around £25 and the work takes around an hour.

If you purchase a more expensive backpack sprayer (Hozelock 12 or 16 litre) then you will find they have a very long reach, about 6 metres! That is enough to reach the top of the roof from access towers erected to gutter height.

So once the moss is initially removed nobody ever needs to get on the roof again. This reduces the amount of foot traffic on the roof tiles. Remove the moss once, re-apply the chemicals from gutter height with a sprayer every few years – simple and cost-effective!

This type of work is often carried out by traditional roofing contractors, although few roof cleaning/coating companies recommend this approach as it doesn’t involve pressure washers and expensive roof coatings/sealants.

It is possible to complete a roof cleaning project without pressure washing, but the chemicals do take a little time to work. Remember: the “dirt” you see on a roof is usually moss and lichen which can be treated and prevented with chemicals.

Can a Moss Killer be Applied Before the Moss is Removed?

This is a common question, can/should a moss killing chemical be applied to the roof before the moss is removed?

The answer is no.

First, you would need much more of the chemical as the moss would soak it up.

Second, thick layers of moss will prevent the chemical from soaking into the tile/overlaps.

Third, if you were thinking of applying the chemical instead of manually removing the moss with a scraper, then you would have a big problem – the dead moss would gradually wash down into the gutters and block them. It could take months if not years for all the moss to wash off the roof. Your gutters would need frequent cleaning and even then they are still likely to become blocked.

Marley Eternit, one of the  largest roof tile manufacturers in the United Kingdom responded to an email enquiry about how to clean their popular “Double Roman” type roof tile with the following statement:

We DO NOT recommend pressure washing your roof covering.

Forticrete, which manufacturers a variety of concrete tiles for the UK market responded to a similar request with the following statements:

Power washing the tiles will remove fines in the concrete which will affect the lifespan of the tiles…. As a manufacturer of concrete roof tiles we would not advocate power washing or recoating tiles as this would invalidate any guarantee.

Which Chemicals are Best?

As we have previously stated, in most cases moss will not damage the roof tiles but can block gutters and drainage points. On certain roofs, such as those with a very shallow pitch, moss can potentially reduce the flow of water off the roof.

If this is the case (and very few roofs suffer from this issue) then gently removing the excess moss via traditional methods and treating the tiles/remaining moss with a fungicide is the best option.

Try any of the moss killers listed here, they can be used on tiles, patios and driveways etc. I have used all of them previously.

As general advice: RoofCoatingScam does not recommend regular roof cleaning just for the sake of improving the appearance of the roof. Foot traffic can damage roof tiles so we only recommend roof cleaning/de-mossing when it is absolutely necessary, ie when the moss is preventing water from draining off the roof.

Is it safe to pressure wash a roof? (Advice directly from tile manufacturers)

Do concrete tiles need to be re-sealed?

Yet another conviction in the roof coating industry

Are thermal roof coatings the biggest scam in the roofing industry?