The following photographs were taken in Surrey and Hampshire, they show shoddy roof coating workmanship and low-quality products.

I saw this roof just after a company had applied a coating, at first glance it appeared to look like a good job but I noticed a broken tile halfway down the roof. When I came back with a camera I saw there were actually two broken tiles in the middle of roof and a further tile just under the ridge at the top.

There is also a tile located to the left that has been pushed up and no longer overlaps the tile underneath. This tile is a little difficult to see though, almost impossible without a camera and high-resolution photo.

You will need to click on the photo below to see the higher resolution version: 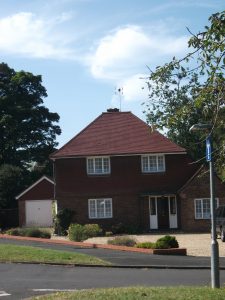 Obviously, this level of workmanship is not acceptable, a roofing contractor should not leave any broken tiles on the roof, if they do they should repair the roof quickly.

It has been a month since I first saw these broken tiles.

This roof was coated about two years ago and is already showing signs of excessive wear, the colour has faded and the waterproof shine has all but disappeared.

Also notice the discoloured lines on the roof, this is where the roof coating company smudged new cement over the existing cement (pointing), rather than removing the cement and laying it as new. This has resulted in a distinct bulge and now the roof coating is washing off it looks pink in colour! 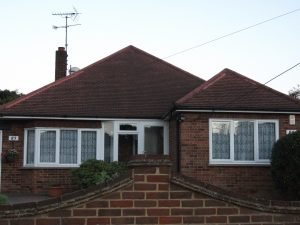 The roof just looks strange but hopefully as the colour washes off and the roof begins to look “weathered” it will mask the pink cement.

The correct method would be to lift the top tiles off the roof and remove all of the cement underneath. The tiles should then be bedded down onto new cement.

Smudging cement over the roof is not good practice, it is laid thin and will peel off after a few years.

It is of course quick, cheap and easy to do.

The two houses shown below are on the same street and it appears a coating company quite literally “cleaned” up down this road… there are five houses that all have the same coloured paint on the tiles.

Sadly the coating is covered in moss (so much for preventing moss growth). The coating is also looking really patchy, some areas still have a gloss finish will others have a very dull appearance.

The product is also starting to peel off in many areas.

To be honest, these roofs look worse than all the others on the street that haven’t been coated: 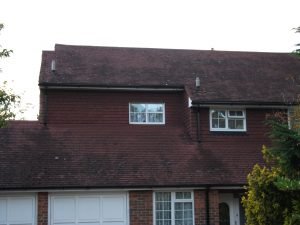 This is a photo of a neighbouring property: 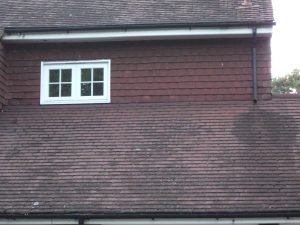